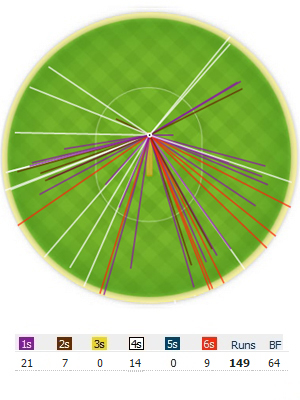 Number of single-digit scores by the Australia batsmen against South Africa in Hobart was 16 - their joint-most in any Test. The last time before this they had 16 such scores in a Test was in 1912 at the Oval.

Duckless implosions, and more wickets than runs
Ask Steven: What is the record for most sixes in a T20 match?
Moeen and Stokes show England's all-round might
Numbers Game: Unlike most other teams, England have a very successful lower middle order
When Moeen trumped Sobers
Also, was Joe Root's 190 the highest score by a batsman in his first Test as captain? Steven Lynch answers your trivia questions
When all 11 players had a bowl
Ask Steven: Also, what's the highest score made on T20I debut?
What score have you not got?
Ask Steven: Sachin Tendulkar was never dismissed or left unbeaten on which number?
The boundary-rider effect
Numbers Game: Has the extra outfielder affected scoring rates in the last ten overs of ODIs?